I am not happy with my book.

Perhaps I’ve had too much time to think about it. But I am having grave doubts. It took me three years to write, including the editing and rewrites, and it got better and better with each round of editing and redrafting until I deemed it ready for publication. But the enforced hands off time whilst searching for an agent or a publisher, and further reading on my own, has really got me questioning my first grand literary endeavor.

As those of you who have been following my brand new blog may already know, just as my book was ready for self-publishing via CreateSpace, I received an email from the Virginia Kidd Agency. In reply to a query I had submitted in October, they said “This sounds interesting; Could you please send us a synopsis and a copy of the manuscript? And could you please refrain from submitting elsewhere for three weeks, to give us time to read your materials and come to a decision?”

I was elated, because the Virginia Kidd Agency has a roster of authors that reads like a Who’s Who of Science Fiction and Fantasy writers. It’s unbelievably flattering to have garnered their interest. But of course, that means that I have to put off actually publishing my book for three weeks (two weeks at the time of this posting). Now, I am not displeased; I would much rather be represented by Virginia Kidd than my own silly self. It would be quite the affirmation that someone besides me and a small coterie of acquaintances considers my work worth reading. And I very much hope that Virginia Kidd will accept my book and make an offer of representation, even though I’ve already spent the money to publish my book on my own.

But now, as I wait, the doubts plague me. Not least because I have read two far superior versions of Medousa’s story than my own (“Medusa: A Mythic Short,” by Jennifer Peter-Woods, and “Cursed by Treachery,” by Luciana Cavallaro). I was reminded of these short stories because I have been adding regular book reviews to my blog, and in reviewing these works, I was reminded how much I enjoyed them. –Reviews of both are scheduled to publish in the coming weeks, though I believe I already posted my reviews on GoodReads, if anyone wants to look now.

One of the things I admire about Woods’ and Cavallaro’s work is the brevity of the story, and yet with that brevity, the complete tale of Medousa, pathos, heartbreak, outrage, and all, were masterfully wrought into the tale. I remember when I first began to write my story, I had hoped that I might be able to get twenty pages out of it. But, as I like to joke, I must have too much Russian in me, and at 137,000 words, mine is certainly no short story. And while there might be much of value in my book, I do not think that the story itself is any better for having been spun out into an epic.

I did choose my source myths a bit differently than those other two worthy writers. They used the more common myth of the three Gorgon sisters being born of Phorkys and Keto, whereas I resorted to a telling that mentioned only Stheno and Euryale. There are other episodes in my book as well; for example, I use a source myth that has Echidna as the mother of Scylla, rather than her grandmother, so to speak. But now, I am not sure that my own novel is any better for using some of the less recognizable myths regarding Medousa and her family.

I did use the opportunity to use numerous figures from classical history as well as legend and myth. Epicurus makes an appearance. As do Chionis of Sparta, and Cynisca, her brother Agesilaus and their parents Archidamus and Eupoleia. And I throw in Ais, Teukros, and Helen of Sparta as well. I even include the Amazons of Themiscyra, working in the post-Homerica tale of Queen Pentheseleia and her generals at Troy. It was great fun.

But in the end, I am afraid that I may have needlessly complicated the story. The writing itself is, I hope, competent. But some stories are better when simple, streamlined, and to the point. And in some parts of my story, I think perhaps I was cowardly (I didn’t describe the Gorgons as being nearly as hideous as Cavallaro did in her story, for example). And, I never made as big a point of Medousa’s beauty as I should have done.

But, what I do have is an “alternate history” of Medousa. No, it’s not as good as some retellings. But I do at least hope that it’s entertaining enough to be widely read.

Maybe my next book will be better. 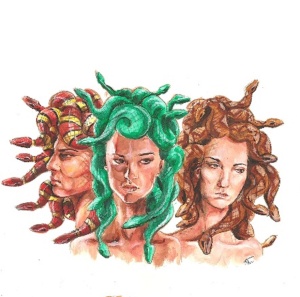 I was born, according to the official records, in the Year of the Ram, under the Element of Fire, when Johnson ruled the land with a heavy heart; in the Cradle of Liberty, to a family of bohemians. I studied Chinese language and literature at Rutgers University, New Brunswick. I spent some years in Taiwan teaching kindergarten during the day, and ESOL during the evenings. I currently work as a high school ESOL teacher, and am an unlikely martial artist. I have spent much of my life amongst actors, singers, movie stars, beautiful cultists, Taoist immortals, renegade monks, and at least one martial arts tzaddik. I currently reside in Beijing's Dongcheng district
View all posts by Michael Butchin →
This entry was posted in Writing. Bookmark the permalink.

"To sting people and whip them into a fury, all in the service of truth."

Truth Can Only Be Found In Silence, But Here We Go Anyway!