ACCURSED WOMEN, self published by Luciana Cavallaro, is a series of vignettes re-telling the tales of five notable women of ancient Greek myth and legend. She writes of Phaedra, Helen, Hera, Pandora, and Medousa. In her short stories, Cavallaro adeptly gives voice to women who are known to us today only by their faults and failings.

The first story is Aphrodite’s Curse, and it concerns Phaedra, daughter of Minos and Pasiphae, sister of Ariadne, and the wife of Theseus. There are a few versions of her story, but the main point is that Hippolytus devotes himself to Artemis and spurns the worship of Aphrodite. She punishes him by cause his stepmother—Phaedra—to fall in love with him. Though there are several variants, Theseus is told that his son raped his wife, at which point Theseus curses Hippolytus who then dies.

In Cavallo’s retelling of the story, she uses the version of the myth in which Phaedra’s nurse tells Hippolytus that his stepmother longs for him, and that Phaedra writes a letter to Theseus saying that Hippolytus raped her.

The story is written from Phaedra’s point of view, she being the author who is desperately writing out her confession as she is dying of hemlock poisoning. She declares that she never sent her nurse to her stepson, but that her nurse, trying to help soothe her lust, tried to entice Hippolytus to come to her.

Her tale is rather circuitous, as she recalls her youth in Krete, growing up in the palace, memories of her father the king and the curse placed on him for failing to sacrifice the bull that Poseidon gave to him, and how Poseidon caused her mother to fall in love with it and bore Asterion, the Minotaur. She mentions Deadalus and Ikaros. She tells of her sister Ariadne, and what Theseus did to her, even after she helped him defeat her brother Asterion and escape the Labyrinth. I actually began to grow weary of this tale as it never seemed to come to a point. However, by the end of the story, as Phaedra dies, she has made the case that her family, for her father’s sins, suffered great curses from the Gods, and that though not innocent, she herself was not so heartless and evil as she seemed.

The next story, The Curse of Troy, concerned Helen and her part in the Trojan war. The tale is skillfully retold here, that Agamemnon arranged his younger brother’s marriage to Tyndareus’ daughter, and Helen herself quickly came to learn that she was a mere possession and a means to possessing her father’s portion of the kingship of Sparta. In an ingenious reworking of the traditional story, Helen never ran off with Paris or stole from Menalaus’ treasury; instead, Agamemnon had her kidnapped and sent to Egypt where she remained under guard for ten years, so that he could have a pretext to attack Troy, and gain control of the rich trade route through the Hellespont. The story is told by an aged Queen Helen herself to an itinerant historian, and was wonderfully thought out and plotted.

The next story is A Goddess’ Curse, perhaps my least favourite of the stories here. Essentially the Goddess Hera appears as a guest on a reality television interview show, a la Maury Povitch, or Jerry Springer. Hera is subjected to questions about her early life, her family, her technically incestuous relationship with Zeus, her vindictive jealousies toward Zeus’ lovers and so on. Not much new was ever revealed about Hera in this piece, but suffice it to say that the interviewer will never forget his encounter with the Queen of the Gods.

Boxed in a Curse, the fourth story, is a retelling of Pandora. In this tale, the story is being told by a grandfather to his two young grandchildren. The story here does not really deviate at all from the traditional tale, but the myth is considerably fleshed out, clearly illustrating the temptation put in place that compelled Pandora to open the jar she was forbidden from opening. Cavallaro describes the urn itself as almost consciously enticing Pandora to open it. I was immediately reminded of the Near Eastern myth of Gan Eden, in which YHVH forbids Adam and Eve from eating of the Fruit of the Tree of Knowledge of Good and Evil, yet placed that very tree in the midst of the garden with them. The main difference is that in the Greek myth, Zeus knew full well what he was doing, and fully expected Pandora to open the jar to let loose pain, suffering, disease, and death upon mankind.

The final story is Cursed By Treachery, a retelling of Medousa’s story. Here, the tale is told backwards, chapter by chapter, beginning with Perseus slaying Medousa and escaping her sisters, and then moving back through time, when we see Medousa, Euryale, and Stheno as carefree, beautiful nymphs, daughters of Phorkys and Keto. Cavallo fills out the myth extremely well; in fact, Cavallo’s tale of Medousa and her sisters is far superior to my own upcoming novel. One of the things that impressed me most was that Cavallo was able to make the Gorgons utterly loathsome and repulsive and genuinely evil, and yet, sympathetic when you learn of their origins. And yet, because of what they had become, you don’t feel very much sympathy for Medousa when she is slain. It was masterfully told.

My favourite stories in this book were the tales of Helen and Medousa. Very well wrought, and I highly recommend this book and this author. 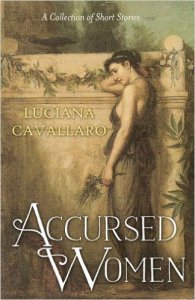 I was born, according to the official records, in the Year of the Ram, under the Element of Fire, when Johnson ruled the land with a heavy heart; in the Cradle of Liberty, to a family of bohemians. I studied Chinese language and literature at Rutgers University, New Brunswick. I spent some years in Taiwan teaching kindergarten during the day, and ESOL during the evenings. I currently work as a high school ESOL teacher, and am an unlikely martial artist. I have spent much of my life amongst actors, singers, movie stars, beautiful cultists, Taoist immortals, renegade monks, and at least one martial arts tzaddik. I currently reside in Beijing's Dongcheng district
View all posts by Michael Butchin →
This entry was posted in Books, Reviews. Bookmark the permalink.

Truth Can Only Be Found In Silence, But Here We Go Anyway!